Cancer is a condition where cells in a specific part of the body grow and reproduce uncontrollably. The cancerous cells can invade and destroy surrounding healthy tissue,  Cancer sometimes begins in one part of the body before spreading to other areas and can be beningn or malignant.

One of the critical processes monitored by the cell cycle checkpoint surveillance mechanism is the proper replication of DNA during the S phase. 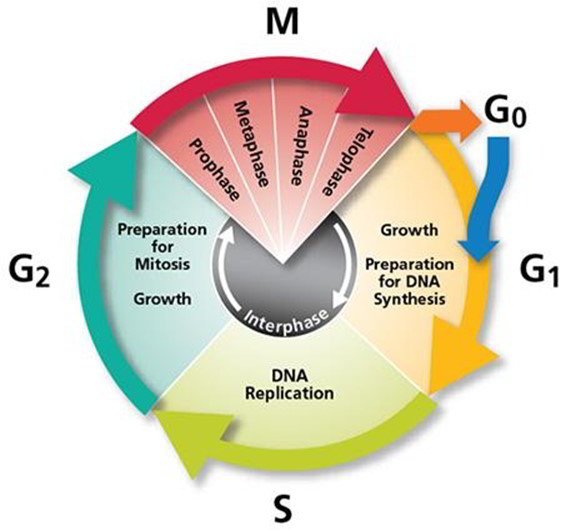 Even when all of the cell cycle controls are fully functional, a small percentage of replication errors (mutations) will be passed on to the daughter cells. If changes to the DNA nucleotide sequence of a gene are not corrected, a gene mutation results.

All cancers start when a gene mutation causes a change in the order of the amino acids that make up a protein that plays a key role in cell reproduction.

The change in the cell that results from the misshaped protein may be minor: perhaps a slight delay in the binding of Cdk to cyclin or an Rb protein that detaches from its target DNA while still phosphorylated. Even minor mistakes, however, may allow subsequent mistakes to occur more readily. Over and over, small uncorrected errors are passed from the parent cell to the daughter cells and amplified as each generation produces more non-functional proteins from uncorrected DNA damage.

Eventually, the pace of the cell cycle speeds up as the effectiveness of the control and repair mechanisms decreases. Uncontrolled growth of the mutated cells outpaces the growth of normal cells in the area, and a tumor (“-oma”) can result. In turn cell cycle is regulated by a number of factors - see below